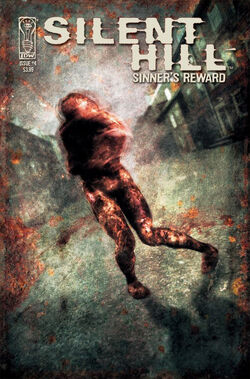 Sinner's Reward, Issue 4 is the conclusion to IDW Publishing's comic release based on Konami's Silent Hill series. Events reach their climax as Jack and Jillian are forced to atone for the sins of their pasts.

Jack tries in vain to apologize to Sara, weakly explaining that killing her and her family was nothing personal. Sara taunts Jack with his own family upbringing—how his father forced him to become a killer—and accuses both him and Jillian of living diseased lives, which have killed so many people along the way.

Jack defends Jill, claiming that she never killed anyone. But Sara retorts that Jill is guilty of greed—of living hedonistically on blood money rooted in crime and the suffering of others. Sara tells Jack that it's not too late for redemption, but he and Jill must do it themselves.

Jill says goodbye to Jack and willingly walks to the Nurses, allowing them to "cure" her by stabbing her to death. Horrified and in denial, Jack runs out of the hospital.

Back outside in the Fog World, Jack runs into Finn, who demands to know where Jill is. Sara comes out of the hospital and reveals that Jill is dead. Enraged, Finn prepares to shoot Jack, but the town will not let him interfere with Jack's potential path to redemption. Pyramid Head appears and impales Finn with its Great Knife.

Jack runs, desperately hoping to escape Silent Hill. As he gets to Rosewater Park, he sees a manifestation of his dead dog, Digger, with a bullet wound on its face. Jack falls to his knees as Sara reappears and reminds him of what he must do. After making a genuine (but still futile) apology to Sara, Jack gives in and puts his gun to his temple. He pulls the trigger and "cures" himself. His dead body lies alone in the park, and the scene transitions to a sunny, serene view of the town.

Retrieved from "https://silenthill.fandom.com/wiki/Sinner%27s_Reward,_Issue_4?oldid=195515"
Community content is available under CC-BY-SA unless otherwise noted.