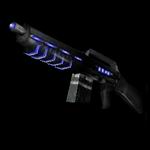 The Tesla Rifle
Description
"The mysterious Tesla Rifle, a weapon from another world. The Tesla Rifle harnesses the power of moonbeams to dispense unlimited electric death. Rumor has it the gun was developed using alien technology."
Range
High
Strength
High
Location(s)
In inventory after starting the game on new fear after the UFO Ending.
Appearances
Silent Hill: Origins

The Tesla Rifle is an unlockable weapon in Silent Hill: Origins, obtained only after the UFO Ending has been achieved. The weapon looks very futuristic and shoots unlimited electricity from its barrel in opposition to actual ammo. It serves a similar role to that of the Hyper Blaster from the first Silent Hill.

The electric beam appears to have a poor range, although in actuality its damage extends well beyond the visible area of effect.

Retrieved from "https://silenthill.fandom.com/wiki/Tesla_Rifle?oldid=194970"
Community content is available under CC-BY-SA unless otherwise noted.