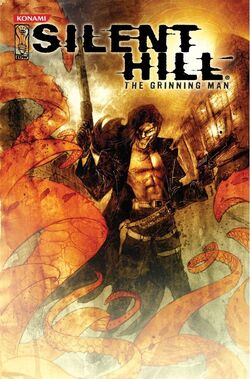 This article is about the comic. For the title character, please see The Grinning Man (character).

The Grinning Man is an entry into the series of comics based on the Silent Hill series of games, featuring art by Nick Stakal. It was collected in the Three Bloody Tales trade paperback.

Taken from the back cover...

For ten years, State Trooper Robert Tower has patrolled mist-shrouded Silent Hill and never seen its nightmarish, demonic creatures. But now, the gun-slinging, double-barreled terror known as The Grinning Man has arrived. Horror is unbound and innocents are caught in the explosive crossfire. For Tower, it's going to be one hell of a last day. Writer Scott Ciencin (Dying Inside, Among the Damned, and Paint It Black) returns for this chilling tale, with art provided by Nick Stakal.

State trooper Robert Tower is on his last day of work before retirement when his new replacement, Mayberry, arrives. Despite the fact that Tower enters Silent Hill on a regular basis to look for missing people, he's never been exposed to the horrifying creatures that roam its streets. However, to play a prank on Mayberry (a firm believer in not only the lore of Silent Hill, but also several other conspiracy theories and supernatural concepts), he stages a "monster" attack with two other officers.

Unfortunately for the men, there is a new force in the town of Silent Hill — a smiling madman with a mastery of both magical spells and firearms who considers the city his own personal hunting ground. The truth about the city is exposed to Tower and the showdown between himself and the mysterious Grinning Man ensues.

The Grinning Man received mixed to negative reviews from fans and critics, many feeling that the titular character was one of the book's biggest weaknesses for his shallow motivation and lack of explanation for his actions.

Internet comedian Lewis "Linkara" Lovhaug reviewed The Grinning Man on his webshow, "Atop the Fourth Wall" – a show dedicated to making fun of bad comics.

Retrieved from "https://silenthill.fandom.com/wiki/The_Grinning_Man?oldid=200063"
Community content is available under CC-BY-SA unless otherwise noted.