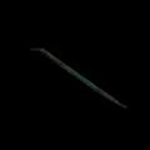 Tire Irons are degradable weapons found in Silent Hill: Origins and, although breakable, are durable and strong. They are found in many places and prove to be useful early in the game, but they lose effectiveness towards its middle as stronger and more durable weapons surface; however, tire irons are still formidable weapons. Travis Grady attacks with the tire iron in a swinging style and is also capable of lifting it over his head and striking a monster for greater damage. The killing blow from the tire iron is having the curved end swung into a fallen enemy's body.

Retrieved from "https://silenthill.fandom.com/wiki/Tire_Iron?oldid=195233"
Community content is available under CC-BY-SA unless otherwise noted.