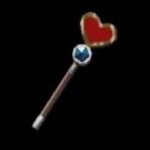 In Silent Hill: Book of Memories, it returns as an Expansion Pack weapon, simply called Princess Heart. It is a very powerful weapon. It has two attacks: a tap will shoot an energy ball and holding the button will shoot laser beams.

Because the weapons respawn in zones when the player resets the game, they can essentially exploit selling them to farm MR:

This method is especially useful if the player finds two (or more) Princess Hearts in a zone (along with a Great Spear or TV Remote), meaning they can easily earn 14,000 MR every 10 minutes or so. For comparison, the most expensive item in the game is the Silver Bracer of Serpents (77,700 MR) and the second most expensive item is the Chamuel's Rose Quartz (27,000 MR).

Fighting evil by moonlight, winning love by daylight, never running from a real fight, she is the one named Princess Heart~

Princess Heart.
Add a photo to this gallery
Retrieved from "https://silenthill.fandom.com/wiki/Transform_Costume?oldid=194158"
Community content is available under CC-BY-SA unless otherwise noted.