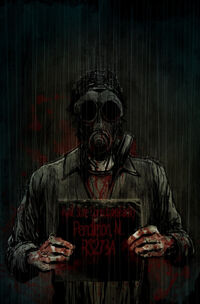 I'm Jo, and I like to edit wikis. I am most prominent on Bulbapedia where I am the Head of Games for the Editorial Board. I also helped administrate the Left 4 Dead wiki, but it's gotten quiet since the series is on hiatus, so I don't go there too often anymore.

When I was Cheryl's age, my siblings bought Silent Hill and went on to rent 2, 3, and 4. I caught glimpses, and did manage to watch them play one time. But I had to leave the room as soon as the radio went off. My curiosity towards the series grew until over time it sunk to the back of my mind.

I heard Room of Angel one day online, and I thought, "I need to know where this comes from!" which obviously led me to Silent Hill 4. I watched a complete playthrough of it, then went on to watch 1, and 3, but I was unable to find a playthrough of 2 at the time.

It wasn't until recently that some friends of mine brought it back to light and I finally got around to watching 2, Homecoming, Downpour, and Origins. After seeing Downpour, I was hooked. I fell so deeply in love with that game that I had to have it. So I bought it, and played it to 100% completion. But I wanted more. Since then, Silent Hill's become a bit of an addiction, constantly craving more after each game.

At this moment in time, I own:

My favorite character in the entire Silent Hill universe is Murphy Pendleton. I heavily relate to him personality-wise. There's a billion other things I like about him, but I'll spare you all the details. (◡‿◡✿) Just know that if you get me to start talking about Murphy, I'm not going to shut up. I have a fascination of his life before Silent Hill, so I tend to have a lot of focus on Carol and Charlie as well. Also know that if you talk badly about Murphy in my presence, I will proceed to rip out your trachea.

I've also made myself a plush doll of Murphy Pendleton which is featured on a blog of mine, liked by Tomm Hulett, and was also given a cameo in a Let's Play by Helloween4545.

My favorite pairing in the Silent Hill series would be the relationship between Henry Townshend and Eileen Galvin. If you get me talking about them, I will become an emotional train wreck, and like with Murphy, I will not be silenced. I enjoy seeing the two interact within the game, and I don't find Eileen annoying like many others do. In fact, I find her to be a fantastic asset. I love the two of them, and now I'm just gushing. I'm glad Silent Hill 4 doesn't have achievements, that way I can continuously get the Escape ending over and over. Aside from Henry and Eileen, I also enjoy the relationship between Alex and Elle. Other than that, I don't "ship" any of the other characters.


I'm going to say Walter Sullivan is my favorite antagonist. He's got a lot of depth to him; more than many other characters. He's had a very unfortunate life, and that's caused him to do very horrific things. My favorite past time in the game is to run up to him and have Henry and Eileen start wailing on him. 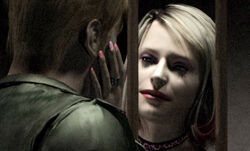 Maria holds second place for favorite antagonist. I love that she doesn't SEEM like an antagonist at first. She's so brilliant. She tries to cause James to stray from his goal, and constantly tears down his psychological walls. She's truly devious.

Now, overall favorite game? Well, I love all of the games equally! I don't dislike any of them. However, I love Murphy so much that it's actually caused Downpour to be bumped up a bit higher than the other games. If I had to pick a second favorite, it would probably be Silent Hill 4.

Honorable mention: The possessed Henry haunting is my favorite haunting.

These are just images on this site that I like.

I finish this page off with one of my favorite gifs. https://dl.dropboxusercontent.com/u/61707450/tumblr_ltsh76QCZm1qidhp7o1_500.gif

Community content is available under CC-BY-SA unless otherwise noted.