View source
watch 02:17
New Pokemon Games - The Loop
Do you like this video?
Play Sound

This article is about the enemy in Silent Hill 4: The Room. For the wheelchairs as an environment staple, see Features of Silent Hill.

Wheelchairs are found frequently in the Silent Hill series, appearing quite often in a variety of locations such as alleyways, hospitals, and even abandoned buildings. In Silent Hill 4: The Room, an enemy in the form of a possessed wheelchair makes itself a hazardous foe.

The Wheelchairs themselves look simplistic with aluminum frames and red padding; however, they move erratically and do a great deal of damage to Henry Townshend if they ram into him. They have the same sort of supernatural damaging presence as Ghosts, including invulnerability, and often appear in large numbers.

Wheelchairs do not actively attack Henry but instead just mill about quickly in a random pattern. They will damage and knock him down if they come into contact with him. When struck repeatedly, the wheelchairs will slow down and eventually stop, as well as lose their supernatural powers. In this state they are just ordinary wheelchairs, but will regain their possessed abilities before long.

They first appear in a corridor in the Hospital World. If Henry stays in the corridor for too long, they will begin to teleport through the rooms.

Aside from the Wheelchairs in the corridor, there is one in another room; it doesn't move or damage Henry, but there is a shadow of a figure sitting in it. When the player re-enters the room later, the shadow and the chair are gone.

This article or section contains speculation, analysis or theories which may not be officially approved.

Much like the Patients, they may represent Walter's distaste for hospitals, and helplessness in general. When Walter was an abandoned baby and child, he was essentially at the mercy of the world, unable to help himself. Additionally, they are simply a manifestation of the supernatural forces at hand. Wheelchairs may also just be enemies created for an appropriate environment.

A Wheelchair traveling through a door.

A shadow tries to leave the wheelchair. 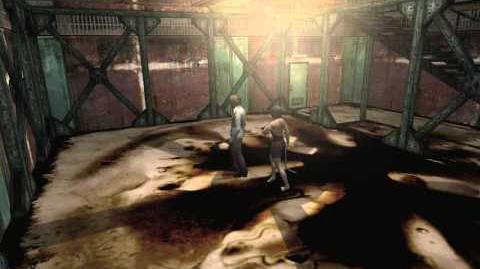 Wheelchair in The Escape.
Community content is available under CC-BY-SA unless otherwise noted.
Advertisement