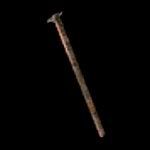 The first weapon of the game
Description
"Wooden Plank with nails at one end. Not very powerful, but easy to use."
Range
Low
Strength
Low
Durability
Indestructible (Silent Hill 2)
Low (Book of Memories)
Location(s)
Automatically obtained in an alleyway, at the appearance of the first monster
Appearances
Silent Hill 2
Silent Hill: Book of Memories

For the weapon in Silent Hill: Downpour, see Plank.

The Wooden Plank is the first weapon James Sunderland obtains in Silent Hill 2. It is located in the archway at the end of Vachss Road, acquired by James automatically before he confronts the Lying Figure.

It is merely a wooden plank with nails driven through it. It has a limited reach and the damage dealt to monsters is low, making this one of the least damaging weapons in the game. However, what it lacks in damage and range, it makes up for in speed and mobility. The plank is the only weapon in the game in which James can move quickly while swinging it.

Thankfully, most monsters in Silent Hill 2 have to be in close proximity to James to attack. If the enemy is slow enough, the player can easily circle strafe around it while attacking.

The makeshift weapon and its ineffectiveness against monsters also adds to the helplessness experienced by the player, enhancing the survival horror aspect of the game.

The wooden plank also exists in Silent Hill: Book of Memories, renamed to "Wood Plank". It is one of the weaker weapons in the game and will break easily.